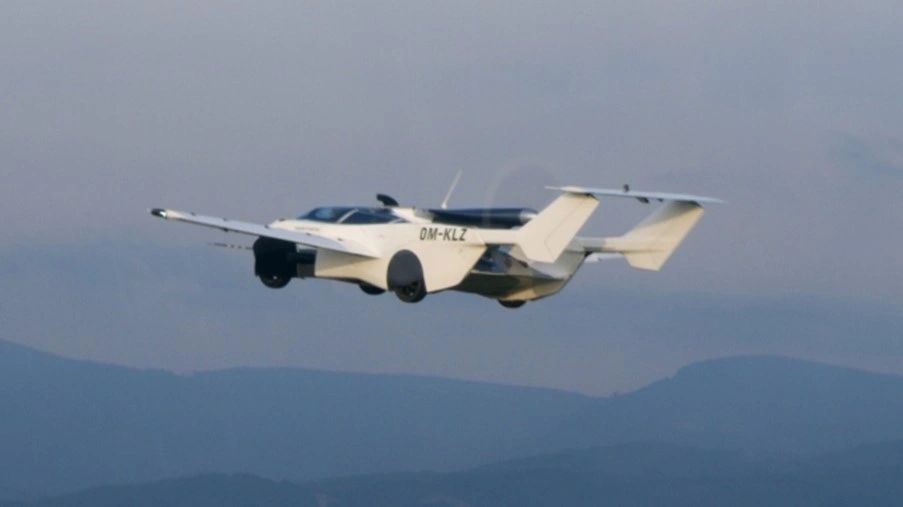 A flying car has completed its first inter-city flight in Slovakia, a milestone its creators claim is “turning science fiction into reality”.

Created by Stefan Klein, the AirCar is a convertible flying car that can transform from car to aircraft in just 135 seconds.

The prototype AirCar, created by Slovakian company Klein Vision, flew for 35 minutes between Nitra and Bratislava airports, before reverting into a car on touchdown and driving into the centre of the nearby town.

The retractable winged vehicle is equipped with a BMW engine and can carry up to two passengers.

It can reach speeds of up to 190Kmh and has been flown at 2500 metres following more than 40 hours of test flights.

“With Aircar you will arrive at your destination without the hassle of getting a ride to [the] airport and passing through commercial security,” said Anton Zajac, co-founder of Klein Vision.

“You can drive your AirCar to the golf course, the office, the mall or your hotel and park it in a normal parking space.”

Flying vehicles are of increasing interest to car and aerospace engineers and manufacturers seeking to create a greener, more efficient modes of transport.

Earlier this week, Michael Cole, president, and chief executive of car manufacturer Hyundai’s European division, insisted that flying cars are part of our future, claiming that such vehicles will play a key role in reducing congestion globally.

GM unveiled an autonomous flying electric Cadillac concept designed to carry a single passenger through the skies at speeds of up to 88.5 Kmh in January.

The Cadillac, which is essentially a giant drone, is powered by a 90kW motor and a hefty battery pack, staying airborne thanks to four rotors that enable vertical take-off and landing.

Mike Simcoe, GM’s design chief, described it as “the Cadillac of urban air mobility,” adding the giant drone was “key” to the company’s vision for a “multi-modal future”.

Ride-hailing firm Uber founded its air mobility division, known as Uber Elevate, in 2016 to develop new technologies for the aerial ridesharing market, but announced it was selling the arm off to transportation company Joby Aviation in December last year.

Joby said it was hoping to develop an” affordable, quiet, and clean transportation service” featuring fleets of electric vertical take-off and landing aircraft it had spent the past decade developing.

Once operational, the service could allow future users to hail the flying vehicles at the press of a smartphone button, with a range of up to 242 Km and a top speed of 322km.