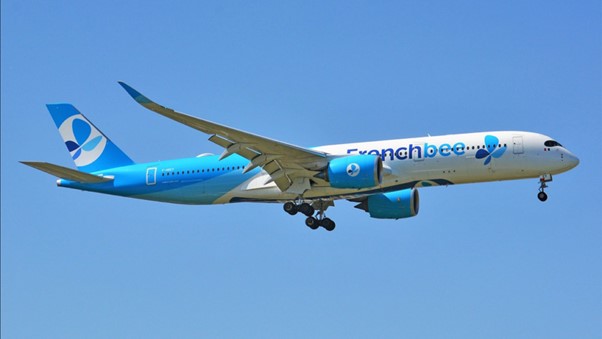 A brand-new Airbus A350-1000 with 480 passenger seats has just arrived at French Bee, the low-cost airline’s that flies long-haul from its hub in Toulouse. The layout was approved when the aircraft builder made upgrades to the emergency exits to handle so many passengers.

Regulators approved a very high-density version of the A350-1000 for Airbus to compete with budget airlines like French Bee and Air Caraibes, which initially planned to use the aircraft with a maximum capacity of 440 passengers.

Airbus claims that the A350-“unrivalled” 1000’s exo-efficiency comes from packing in as many passengers as possible onto a plane that is already exceptionally fuel-efficient.

French Bee has chosen a high-density layout with Economy seats grouped in a 3-4-3 arrangement to fit so many passengers into a small area. French Bee has had to shave almost an inch off the breadth of most seats to accommodate all the passengers in its economy class.

French Bee’s Premium Economy cabin, which will include 40 seats, will be located at the front of the plane. The French capital Paris and Indian Ocean Island of Reunion are frequent destinations for this aircraft.

There are few routes on which French Bee will run into problems because the economics of the jet enables it to be filled to near capacity on every journey.

Travellers are willing to trade comfort for the possibility to fly to the Indian Ocean for a fraction of the price airlines used to charge for flights to Reunion.