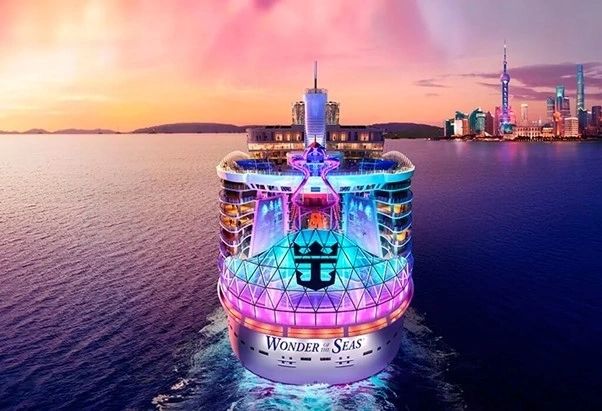 This will be a big event for cruise fans! The first voyages of the biggest cruise ship ever built are now available for booking.

Royal Caribbean on Tuesday began taking reservations for the initial sailings of its much-awaited, soon-to-debut Wonder of the Seas, the fifth vessel in its ground-breaking Oasis Class series.

At 236,857 tons, Wonder of the Seas will be nearly 4% bigger than the current size leader in the cruise world, Royal Caribbean’s 3-year-old Symphony of the Seas. It will be able to hold a staggering 6,988 passengers, a new record for a passenger ship.

As previously announced, the first sailings of Wonder of the Seas will be in Asia, marking the first time one of the world’s biggest cruise ships has debuted in the region.

Royal Caribbean on Tuesday said Wonder of the Seas would debut in March 2022 with an initial series of four- to eight-night sailings to Japan out of Shanghai, China.

The vessel then will reposition to Hong Kong in November 2022 for a series of four- to nine-night voyages to Vietnam, South Korea, Japan and Taiwan.

Wonder of the Seas will be a sister to the world’s biggest cruise ship, Symphony of the Seas.

The deployment of the ship to Asia comes amidst growing demand for cruises from Chinese travellers a market that Royal Caribbean has pursued aggressively for more than a decade. Royal Caribbean began deploying ships to China in 2009.

“China continues to be one of the most important parts of the world for Royal Caribbean,” Royal Caribbean president and CEO Michael Bayley said in a statement accompanying Tuesday’s announcement. “We have won the trust of our partners and the favour of travellers and built on that significantly since we first set sail 12 years ago.”

Bayley said the deployment of Wonder of the Seas to China was a mark of the line’s “strong commitment to the market’s growth.”

Currently under construction at the giant Chantiers de l’Atlantique shipyard in St. Nazaire, France, Wonder of the Seas originally was scheduled to debut this year. But its arrival was delayed due to the impact of the COVID-19 pandemic on the shipyard.

Wonder of the Seas was ordered long before the start of the pandemic and has been under construction since April of 2019.

Wonder of the Seas will be similar to Royal Caribbean’s four earlier Oasis Class vessels with a few new twists that will contribute to its bigger size, including a dedicated suite area with a private lounge, restaurant and sun deck.

Like the four earlier Oasis Class ships, it will be 18 decks high and nearly 1,200 feet long, the equivalent of more than three football fields.

Each of the ships has been a little bigger than the last.

Ranging from 226,838 to 228,081 tons, each of the four existing Oasis Class ships are more than 20% bigger than any other cruise vessels afloat and like nothing else you will find at sea.

Resembling megaresorts on land, each of the ships has three separate main pool areas, a kiddie splash zone, surfing simulators, miniature golf courses, basketball courts and even zip lines. And that is just on their top decks.

Inside the vessels, you will find more lounges, bars, restaurants, and shops than you can imagine, plus huge casinos, spas and theatres with real Broadway shows.