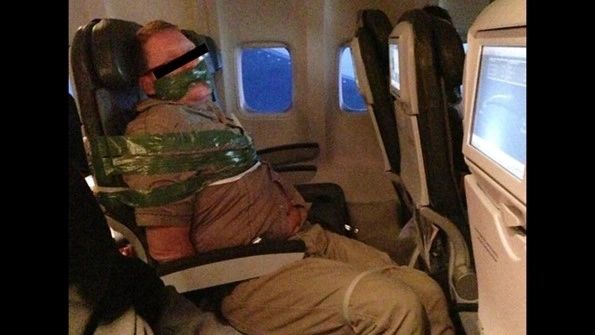 This is a phenomenon that has become more prevalent since the pandemic, as people all over the world have been forced to live with lockdown and restrictions, social distancing, mask-wearing, and other measures that have undoubtedly caused stress for some and mental health issues for others.

Unruly airline passengers have racked up a record US $1 million in potential fines this year, a toll of the tumult in the sky as travellers return after being grounded by the pandemic in 2020.

The latest cases, involving 34 passengers who flew between January and May, were announced Thursday by the Federal Aviation Administration. Their transgressions ranged from refusing to wear a face mask, as required by federal law, to punching a flight attendant in the nose.

These are just a few of the dozens of enforcement cases announced by the FAA as part of its crackdown on passengers who interfere with airline crews.

According to the FAA, airlines have reported approximately 3,900 incidents of unruly passengers this year, with three-fourths involving refusal to wear a mask.

Another common factor is alcohol. American Airlines extended its prohibition on alcohol sales in the main cabin until January 18, matching the timing of the federal mask mandate. American Airlines still sells alcohol to business and first-class passengers.

An FAA spokeswoman confirmed that the proposed fines against passengers, who can appeal, totalled $1 million in a single year. This year, the FAA has opened investigations into 682 travellers, breaking the previous high of 310 in 2004.

A man threw his carry-on bag at other passengers on a JetBlue flight in May, grabbed a flight attendant by the ankles, and put his head up her skirt before being restrained with plastic ties. The FAA wants to fine him $45,000 for his actions.

The FAA is suing a man for $42,000 after he refused to wear a mask on another JetBlue flight in May and threatened other passengers, including making stabbing gestures towards some. Before the police took him off the plane, crew members confiscated a bag containing a substance the man was snorting and armed themselves with ice mallets.

The FAA has not identified any of the passengers, including a man accused of punching a flight attendant in the nose during a third JetBlue flight. Even though police were called in several cases, it was unclear how many of the passengers summoned by the FAA face criminal charges.

This month, the FAA’s chief asked airport officials across the country to collaborate with local law enforcement to prosecute more cases. The FAA lacks the authority to bring criminal charges.

Air travel in the United States has returned to nearly 80% of pre-pandemic levels, but airlines have reduced flight frequency by a similar amount, resulting in overcrowded planes.

According to FlightAware data, bad weather and a lack of crews due to airline staff cuts last year have contributed to tens of thousands of cancelled and delayed flights this summer, making travel even more stressful than before.