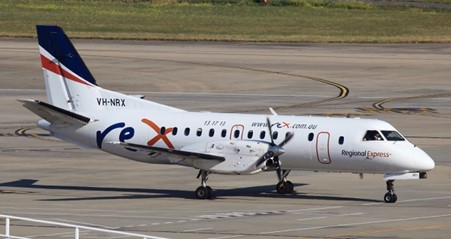 As early as 2024, Rex will test the use of planes with retrofitted electric engines on short regional flights of less than an hour.

With this new idea, Rex might have Australians flying in electric planes within the next decade – and paying less for it.

Australians enjoy travelling domestically and abroad but paid a high price for the opportunity between May and July this year, with airfares rising by 14%.

The increased costs have been primarily attributed to a limited fuel supply due to the Russia-Ukraine conflict, but what if aeroplanes didn’t use traditional fuel at all?

This is the reality Rex is aiming for, in conjunction with Australia-based Dovetail Electric Aviation, by swapping or retrofitting the airline’s existing fleet of Saab 340s’ fuel-driven engines for electric engines fuelled by hydrogen fuel.

At this point, if the Civil Aviation Safety Authority approves the technology, Rex will be Australia’s first airline to operate a fleet of commercial electric planes.

The adjustment could result in zero carbon emissions, calmer flights, and possibly reduced prices due to fewer operating expenses.

However, experts caution that electric planes will not become the norm in Australia for several decades as technology struggles to keep up with the needs of the aviation sector.

However, not all of the 36-seater Saab 340s will be upgraded with electric engines; Mr Sharp explained that because present technology limits the distance planes can travel, the modifications will only be installed on planes serving short flights of around an hour.

The battery-powered planes are expected to service routes such as Sydney-Wagga Wagga and Sydney-Coffs Harbour.

Longer journeys, like the Sydney-Broken Hill flight, will use conventional fuel.

Mr Sharp believes the technology will be much less expensive to operate than fuel-powered planes, allowing the airline to make a better profit on less popular regional routes, maintain current ones viably, and possibly open up new routes that cater to fewer customers.

“We will do experiments with a real aeroplane in 2024, where we will swap out the existing engine, which burns jet fuel,” Sharp told the ABC. “We’ll also instal an electric motor powered by batteries and hydrogen.”

He said that the testing would be a critical step in the regulatory proceedings before other planes can be outfitted with electric engines.

“It will require all of the Civil Aviation Safety Authority’s permits to ensure it’s completely safe,” he said.

“However, I anticipate seeing this happening in this decade, something I would not have imagined feasible three years ago.”

Rex will provide an aircraft to be utilised as a test for the project and its engineering, MRO, and storage resources throughout.

“It’s noticeably different,” Sharp stated. “Electric motors are intrinsically safe — they are likely to be safer than any other type of motor.” Another advantage is that it will emit significantly lower carbon dioxide emissions — essentially none. This will help us achieve our national goal of lowering carbon emissions over the next few years.”

According to the airline’s deputy chairman, the new technology could result in lower regional airfares and new regional air routes that were previously judged unviable.

“This technology has three advantages, one of which is the potential for lower airfares,” Sharp explained.

“But, secondly, it means that routes that are currently marginal routes that make you wonder if you should bother continuing to do them — it will make those routes feasible in the long run.”

And it will provide new opportunities in towns and cities where you would not have expected a regional aviation service to be viable.

“Those towns will suddenly become profitable and will be able to extend the network into communities that do not currently have regional air service.”

Rex and Dovetail aim to see electric aircraft conversion centres across the country and around the world, with their sights already set on Europe and Singapore.

The technology could also be used to convert larger aeroplanes to electric-powered planes in the future.