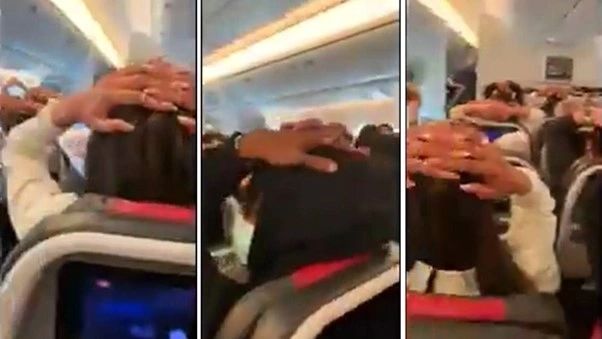 Passengers aboard an American Airlines flight to Miami experienced a bizarre security incident on Thursday night with passengers admitting they were scared for their lives after an out-of-control passenger was allegedly arrested.

Passengers were instructed to put their hands on their heads for the final hour of the Boeing 777’s flight from Los Angeles. Passenger Chris Nguyen caught snippets of the bizarre situation despite instructions against filming. Mr Nguyen said the flight landed around 4:42pm, where armed men boarded to arrest the allegedly threatening passenger.

“The arrest happened when 2289 landed in Miami (flight landed at 4:42 ET),” Chris Nguyen tweeted. “Passengers were ordered to put their hands on their heads for 45-60 minutes before landing. Strangely, passengers were repeatedly told not to film on the plane.”

“Scariest moment of my life. Are we going to get any coverage on what happened? I am traumatised. I was in the back near the passenger,” one passenger tweeted.

The airline later described the event as a “possible security risk” but refused to elaborate further on the details of the incident.

“On July 7, American Airlines flight 2289, a Boeing 777-300 operating from Los Angeles (LAX) to Miami (MIA), was met by law enforcement upon landing at MIA due to a possible security threat on board,” American Airlines said via the Independent.

“Passengers were deplaned and bussed to the terminal, and the aircraft was inspected by authorities. Safety and security is our top priority and we apologise to our customers for any inconvenience this caused.”

The airline did not provide additional details on the incident.

Surprisingly, the event came as another passenger reported similar behaviour from another American Airlines flight.

“I was on a flight last night and a woman was so out of control (passenger) she had to be restrained and literally duct-taped to her seat – crazy screaming person – 1.5 hours of screaming – police were waiting when we landed,” the person said via TMZ.