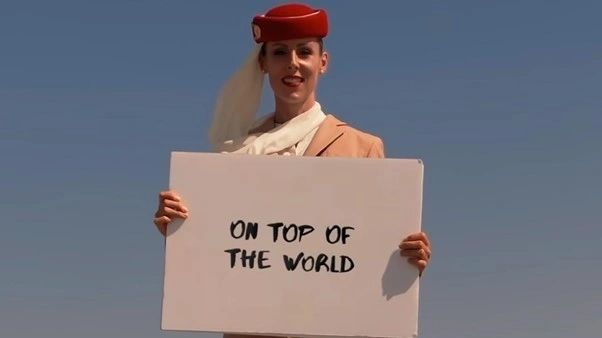 Emirates’ jaw-dropping advertising stunt has certainly piqued people’s interest, but those who are afraid of heights should avoid watching.

To commemorate the decision to allow quarantine-free travel between the United Kingdom and the United Arab Emirates, the Dubai-based Emirates pulled a stunt so unbelievable that most people assumed it was a hoax.

A woman dressed in a cabin crew uniform delivers a message in the style of Love Actually to welcome visitors back to Dubai after it was removed from the UK’s red list.

At first glance the cards are informative, but nothing that hasn’t been done thousands of times since the release of the 2003 romantic comedy.

“Moving the UAE to the UK’s Amber list has made us feel on top of the world,” the cards read.

The information is followed by the tag line, ‘fly Emirates, fly better’.

The camera suddenly zooms out on the final card, and viewers realise the woman is standing on top of the world’s tallest building, the Burj Khalifa, which stands 830 metres tall.

She’s smiling, wearing heels, and holding only the cards, with nothing to keep her balance.

Many speculated that the ad was created using CGI because of the apparent insanity of perching a flight attendant 830 metres above the ground.

Internet users even praised the airline for its incredible special effects.

But hold on to your lunch because it was entirely real.

Don’t worry, no flight attendants were at risk of harm in the making of this ad. Emirates flew in a professional for the job.

Nicole Smith-Ludvik, an apparently iron-stomached skydiver, stuntwoman, and yoga instructor shared the advert on her Instagram page, thanking the airline for involving her.

“This is, without a doubt, one of the most amazing and exciting stunts I’ve ever done,” Smith-Ludvik wrote.

“A big shout out to Emirates Airlines for your creative marketing idea! It was a pleasure being a part of the team!”

“Cheers to the dream team!”

One fan asked in the comments how she felt while standing up there.

“I’m in my element at that height. I loved every minute of it,” Smith-Ludvick replied.

Travellers from countries on the ‘amber list’ who are fully vaccinated do not need to be quarantined upon arrival in the UK.

Australia is a green-listed country for travel to the United Kingdom, so there is no need for quarantine unless the traveller tests positive for COVID-19.

However, due to international border closures, Australians are not permitted to leave the country unless they have an exemption.