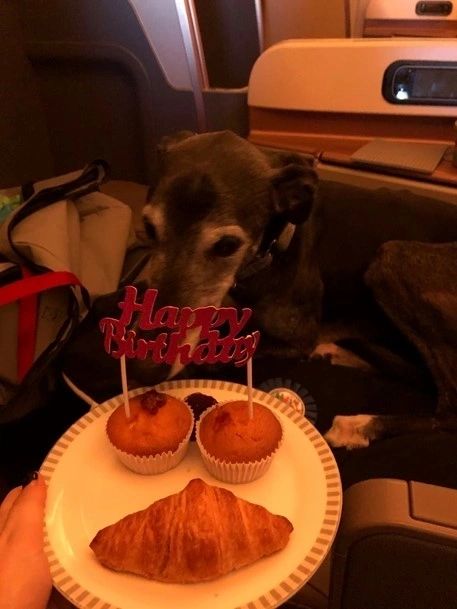 This Greyhound travelled in business class on Singapore Airlines from Sydney to Europe via Singapore. Lewis, an ex-racing greyhound, “is a graduate of Melbourne’s Greyt Greys Rescue,” and his owner just relocated to Italy. She obtained authorisation to go from the Australian government. And, with so few people doing the same, her Singapore Airlines planes were almost completely empty.

The dog, who was seated in the first row of business class, even received an in-flight birthday celebration replete with treats and cake.

Greyt Grey Rescue wrote on their Facebook post “Lewis, one of our grad snoots, has begun a new chapter in his life. He and his mother relocated to Italy over the weekend”.

Lewis quickly settled down and was fine during the flights! There will be no sobbing and no mishaps. The flight crew described him as the best dog they had ever had, including highly trained assistance dogs. Lewis celebrated his birthday aboard the plane and was lavished with gifts from the crew.

“We will miss you, Lewis! Please send us lots of photos of your new adventures!” Greyt Greys Rescue wrote on their Facebook post.