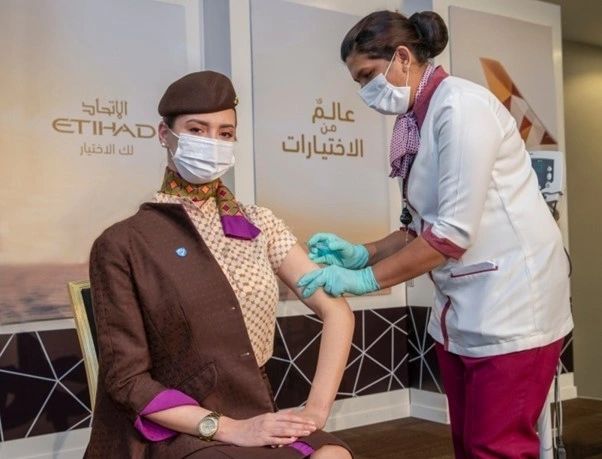 The world’s first COVID-19 vaccinated airline might already need to give its pilots and flight attendants booster shots.

Pilots, flight attendants and other frontline workers at Etihad Airways may already have received a third ‘booster’ shot of the Chinese manufactured Sinopharm COVID-19 vaccine used on some of the airline’s employees under an emergency use authorisation and while the vaccine was still undergoing Phase III trials.

Some of the Abu Dhabi-based airline’s flight attendants received the Sinopharm vaccine as early as last November before a wider rollout was announced earlier this year. In February, Etihad announced it had become the first airline in the world to have 100 per cent of pilots and flight attendants onboard its flights fully vaccinated against COVID-19.

The Sinopharm shot, which is manufactured locally through a deal between the Chinese vaccine developer and Abu Dhabi-based technology company Group 42, has become a bedrock of the emirates vaccine rollout and was tested with a two-dose regimen administered at least 21-days apart.

But the United Arab Emirates recently announced plans to offer a third booster dose as part of what it called its “proactive strategy to provide maximum protection for society”. The National Emergency Crisis and Disaster Management Authority said priority would be given to those aged over 60 or suffering a chronic disease, although the booster shot could be offered to others as well.

The announcement came nearly a month after the head of the Chinese Centre for Disease Control and Prevention apparently suggested that the Chinese developed COVID-19 vaccines didn’t offer much protection.

Gao Fu told a conference in Chengdu that Chinese vaccines “do not achieve very high protection rates,” although he quickly qualified his widely reported statement, saying he wanted to look at ways to increase the effectiveness of the vaccines even further.

The World Health Organization (WHO) approved the Sinopharm vaccine earlier this month, saying that after two doses, Phase III studies showed an efficacy of 79 per cent against symptomatic COVID-19 infection and 79 per cent efficacy against hospitalization.

The vaccine has been demonstrated to be highly efficacious, although the UAE has so far failed to explain further why it has approved a booster shot for the Sinopharm vaccine. The booster is to be given at least six months after the second shot.

Questions have been raised about the vaccine’s real-world efficacy after a surge in COVID-19 infections in Seychelles – the world’s most vaccinated country which has largely used the Sinopharm vaccine donated from the UAE.

Etihad has not confirmed whether flight attendants or other employees had yet been invited for a third booster shot of the Sinopharm vaccine.

Bahrain has also approved a booster shot of the Sinopharm vaccine but there is continuing debate as to if or when booster shots should be offered for other vaccines from Pfizer / BioNTech, Moderna and AstraZeneca. Booster shots might be needed to maintain antibody levels or to counter vaccine-resistant COVID-19 variants.